Katie Kring is a baker, artist, farmer and writer-of-musicals, based in Springfield, MO. She received her MFA in Musical Theatre Writing at New York University’s Tisch School of the Arts and her BFA in Performing Arts Technology the University of Michigan in Ann Arbor.

While at the University of Michigan, she participated in the creation of many interdisciplinary and multimedia performance pieces, culminating in the world premiere of an original dance piece, Dancing in Trees, in which she danced, 25 feet in the air, in the branches of a live beech tree, to original music and video projections. And lived to tell about it. 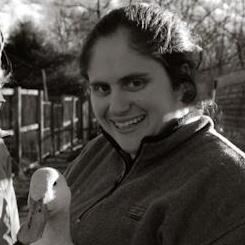 Her full-length musical, PEARL, a re-imagination of Nathaniel Hawthorne’s The Scarlet Letter, was presented as a part of Goodspeed Musicals’ Festival of New Artists in East Haddam, CT. She also wrote the book and lyrics for ONWARD, a collection of three one-act musicals, in collaboration with composer J. Oconer Navarro, which was produced at 59E59 in New York City.

Katie also is a composer of choral music. Her piece “The Snow is Deep on the Ground,” a setting of a poem by Kenneth Patchen, will be published by Walton Music in 2015.

When she’s not writing, she runs a successful baking company, KatieMade, which specializes in artisan breads, gourmet confections, and all manner of other things fantastical and delicious. She sells her wares at Farmers Market of the Ozarks, a Top 100 Market, of which she is a founding member and past board president. She also creates and sells one-of-a kind pysanky eggs.

Katie enjoys singing in the Springfield Chamber Chorus and spending time with her pet ducks and her beagle, Challah.

Rob Hartmann is currently on the faculty of the Graduate Musical Theater Program at New York University’s Tisch School of the Arts, where he received his MFA. His undergraduate degree, a BFA in Musical Theater performance, is from the University of Arizona in Tucson, where he grew up.

His work has been produced across the country, including in New York, Los Angeles, Chicago, Minneapolis, Seattle, Nashville, Dayton, and other cities. Some of his musicals include MACABARET, written with Scott Keys, which has had over two dozen productions; and VANISHING POINT, written with Scott Keys and Liv Cummins, a three-woman musical about aviator Amelia Earhart, author Agatha Christie and evangelist Aimee Semple McPherson, which has been performed across the US — most recently winning Best Small Musical for its Baltimore production. The show made its international premiere in Madrid, Spain in 2014, and will be seen in Hamburg, Germany, in 2015. 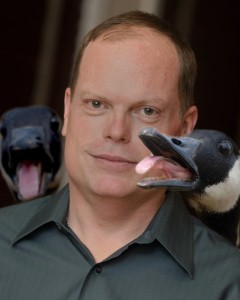 Writer Rob Hartmann, capable of maintaining his cool during a goose attack.

Rob has also recently written the music for ALIENS: THE PUPPET MUSICAL, a parody version of the film ALIENS performed with, yes, puppets, created by Meat & Potato Theater in Salt Lake City.

Rob is also an orchestrator and arranger, whose work has been heard in Carnegie Hall and Avery Fisher Hall in New York.

Katie and Rob have previously collaborated on FARMERS MARKET THE MUSICAL, which premiered in West Virginia in 2013; they were commissioned to create two educational musicals for the Monterey Bay Aquarium in Monterey, California. Their newest musical, KELLY THE DESTROYER VERSUS THE SPRINGFIELD COBRAS, a rock musical for young people, premiered in Spokane, WA in April 2015.